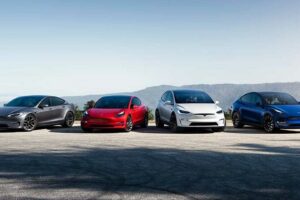 Tesla’s global production and sales results in the first quarter of 2022 did not disappoint. Deliveries reached another quarterly record, while the production was at a near-record level. That’s outstanding news considering how challenging the global economy and automotive industry is in particular.

In this post, we will take a look at the numbers and charts to visualize the progress and better understand what can be achieved in the near future.

Let’s get into details.

The lion’s share falls on the Model 3/Model Y – over 291,000. Another bit of positive news is that the production of the refreshed Model S/Model X further increased compared to Q4.

The preliminary sales result (customer deliveries) was at a record high of 310,048 (up 68% year-over-year). The Model 3/Y reached an all-time record, while the Model S/X pair improved towards the levels seen in the previous years.