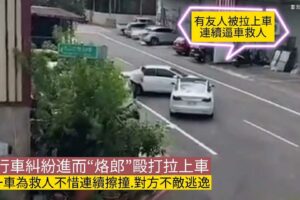 Who knew the Tesla Model 3 would make such a successful battering ram? You may have seen the video above over the last few days. It’s been shared around social media, but it seemed no one was really quite sure what was happening. Sure, it’s a Tesla Model 3 repeatedly crashing into another car, but why?

If the story proves true, this Model 3 owner in Taiwan is a hero. Some social media commenters have said that Tesla CEO Elon Musk should give the Tesla owner a free replacement car to reward their bravery.

As the story goes, a Model 3 owner in Taiwan helped save a friend who was being kidnapped. As the video clearly shows, the Tesla owner purposely crashes into a Toyota, then works to block it multiple times as the car tries to flee. Several collisions later, the Toyota seems to be either stuck or immobilized, though the video ends abruptly.

According to Teslarati, news reports out of Taiwan have stated that a driver of a black Tesla Model 3 was involved in some sort of conflict with the occupants of a rented Toyota Yaris. The Yaris was allegedly rented by a man and three passengers. The driver of the Yaris assaulted the Tesla owner and tried to force him into the rented Yaris.

Another Model 3 owner, the one in the white Tesla, reportedly came to the rescue of his friend as the attempted abduction was underway. He used his Model 3 to do everything in his power to stop the people in the Yaris from fleeing with his friend.

Fortunately, due to the Model 3’s heavy weight, lower center of gravity, strong and instant acceleration, and excellent crash-test performance, it seems the driver was successful. Reports claim the police were able to arrest the Yaris driver, however, the three other occupants in the Toyota escaped. Since the Yaris was a rental, the police were able to get information about the identity of the three people who fleed.

In the end, the Yaris was pretty much destroyed, but the Model 3 held its own quite well. This comes as no surprise thanks to Tesla’s emphasis on safety and strong crash-test ratings. Check out the video and then leave us your comments below.