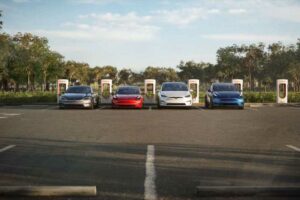 During the second quarter of 2022, Tesla maintained a fast expansion rate of its Supercharging network.

The number of new stations amounted to 247, which is on par with Q1, but slightly less than a year ago (by 8%). The number of new individual connectors increased by 5% year-over-year to 2,508, which is the second highest quarterly result ever.

The average ratio of connectors per station increased in Q2 to 10.2 (up 14% year-over-year).

Additionally, Tesla continues to expand the Non-Tesla Supercharger Pilot in Europe, where customers can use some of the Superchargers in a total of 13 countries.

As of the end of the quarter, Tesla increased the cumulative number of Supercharging stations and stalls to:

Considering the previous growth rate, it’s expected that the 40,000th Supercharging stall will be installed before the end of this year.

The number of Tesla Superchargers (globally):

If all of the 36,000+ stalls are powered simultaneously, at 100 kW average (for illustrative purposes), the total output would be over 3.6 GW.

As of today, Tesla Superchargers offer a peak power output of up to 250 kW, but it’s expected to increase to 300 kW and beyond in the future. There was a rumor about 324 kWh in the case of V3 Superchargers.

The latest reports indicate that Tesla is also preparing to launch V4 Superchargers, which are expected to remind us of the design of Tesla Megachargers (for trucks), and will offer higher power and a longer cable.