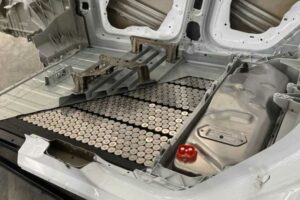 According to a recent report by Electrek, Tesla’s structural battery pack can be removed from the crossover. This makes perfect sense since at some point there could be an issue with the pack. Moreover, while the battery pack stands to last a very long time in most cases, it’s never going to last forever.

Tesla just recently started delivering Model Y crossovers produced at Giga Texas with the brand’s proprietary 4680 battery cells and structural pack. Tesla CEO Elon Musk and other executives revealed the plans for the new cells and pack back in 2020, during its Battery Day presentation.

For those unaware, in the simplest terms, the battery pack is now part of the actual structure of the electric car. The innovation simplifies the overall manufacturing process, much like Tesla’s Giga Press diecasting process. The 4680 cells themselves also provide multiple advantages over Tesla’s 18650 and 2170 cells.

That said, some people have wondered what happens when you have a Tesla with a structural battery pack that needs repair or replacing? The same question could apply to details related to Tesla’s megacasting process, since the vehicles are constructed of a small number of large and inclusive segments. Following a collision, there’s a chance an entire segment of the car, including its structural battery pack, could need to be replaced.

Consider that a traditional, truck-based body-on-frame vehicle is usually easier to work on than most vehicles today that employ newer unibody platforms. This means many people who are quite familiar with vehicle repair may have to take their cars in for service, or, at the very least, deal with lengthy and painstaking repair processes to fix even minor issues. It seems the same may prove true for Tesla’s vehicles, especially those with the new structural battery pack.

Based on details from Tesla’s official service manuals, 143 total steps are required to remove a structural battery pack. You actually have to remove a significant portion of the Model Y’s interior and floor area before you can get at the pack.

Putting a new structural battery pack into a Tesla vehicle adds another 171 steps. Some simple math proves that a full Tesla structural battery pack replacement requires 314 steps. Fortunately, EV batteries are expected to last much longer than the cars themselves, though there are always exceptions and cases based on extenuating circumstances.

Are you concerned that Tesla’s new processes – which work to streamline manufacturing – could lead to major headaches for owners down the road? Start a conversation in our comment section below.