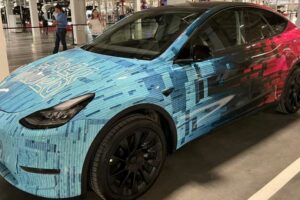 The grand opening of Tesla’s Gigafactory Texas yesterday included several updates from the company on its products, including the first vehicle made at the new plant.

That would be the Tesla Model Y featuring the structural battery pack that uses the new 4680 cylindrical-type cells. This is a new addition to the range dubbed Model Y Standard Range All-Wheel Drive and it was spotted at the Cyber Rodeo 15,000-person party in Austin.

This is likely the model that showed up on the EPA’s FuelEconomy website last month as having 279 miles of range.

Wrapped in Cyber Rodeo vinyl, the model was spotted by Tesla Raj, who attended the grand opening event, and the details he was able to check out on the vehicle’s infotainment screen appear to fit the description of the Model Y added to the EPA’s FuelEconomy website last month.

For example, decoding the VIN reveals that the vehicle was manufactured at Giga Texas and is a Standard Range version of the Model Y.

Obviously, the Tesla Model Y Standard Range features the new cylindrical-type 4680 cells as part of the new structural battery pack. For now, the Austin factory is the only one building the Model Y with the new batteries.

The 4680 structural pack reduces the number of parts used in the battery and the vehicle, which helps cut manufacturing costs. The car also gets lighter and improved crash performance as a result.

According to Tesla, the structural battery pack reduces the size of the pack manufacturing line by half compared to the company’s other factories.

It’s interesting that Tesla has started production of the entry-level Model Y in Austin; usually, the EV maker kicks off production with the high-end trims. The explanation could be that 4680 production is slow at the moment, as Troy Teslike noted on Twitter.

He says it makes more sense for Tesla to make the Model Y SR AWD as this trim has a 68 kWh pack, whereas the Model Y LR AWD has a capacity of 82 kWh. With the base model needing fewer cells, it means Tesla can make more cars. Obviously, that’s just unconfirmed speculation for now, so do take that with a grain of salt.