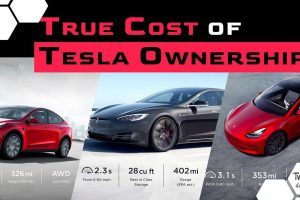 Do electric cars really cost less than gas cars over the long term?

Two Bit admits that when he first made the video, he had no idea that cars he used for comparison to the Model 3 – the Honda Civic and BMW 3 Series – would end up losing sales to the Model 3. In fact, studies have shown that many people actually moved from such cars to a Model 3, which, in many cases, was their first electric car.

Now, about three years later, Two Bit has decided to dive back into the EV cost of ownership topic. He shares plenty of information about the Tesla Model Y, as well as the Model 3. This is fitting since a few recent studies have proven once again that electric car ownership can actually end up being cheaper than gas car ownership. Don’t let the upfront price concern you too much. It’s more important to figure out how much a Tesla (or any EV) will cost you to own over time.

The Tesla Model 3 has sold better than most people could have ever expected, and the Model Y electric crossover is poised to do the same. Tesla continues to lower prices on its vehicles, improve their performance, and add range and features. The Model Y is now available in Standard Range form, for a reduced starting price of $41,990. In addition, a two-seat third row is available for an extra $3,000.

Check out Two Bit da Vinci’s Tesla Model 3 and Model Y cost of ownership analysis. Then, let us know what you think in the comment section below.