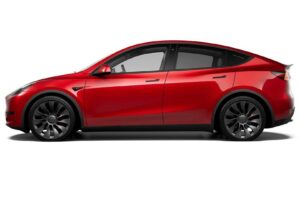 Already close to 900 units were registered within two weeks, which is more than any other EV.

The Made-in-China (MIC) Tesla Model Y is the most registered new car in Norway so far this month (as of August 29) after less than 10 days since the first shipment.

With close to 900 units registered, the Model Y has a noticeable advantage over the Volkswagen ID.4 (nearly 750 units) and Ford Mustang Mach-E (over 660). It means that most likely the Model Y will be the best-selling car for the month of August, although we must be aware that it has more to do with order backlog and volume deliveries than sales.

In the past, many times volume deliveries of an all-new electric model enabled it to make a big splash and in this case, it will happen again.

Moreover, the Tesla Model 3 also notes a strong result of over 600 units, which places it fourth on the list, just ahead of the Hyundai Ioniq 5 (573) and will allow strengthening its first place year-to-date spot.

The upcoming sales reports from Europe will be very interesting as the Tesla Model Y finally is joining the party. We guess that the Model Y will add some serious volume to Tesla’s tally, which for quite some time was dependent only on the Model 3.

Time will tell whether the Model Y can beat other electric models in the hot crossover/SUV segment, including the Hyundai Ioniq 5, multiple MEB-based EVs and more. A lot depends on whether Europe will receive the Standard Range version (recently launched in China), and how competitive Made-in-Germany Model Y will be.