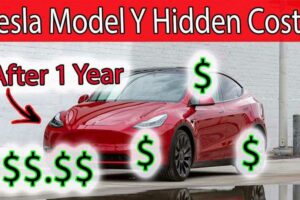 Although still very reasonable when compared to ICE running costs, the Model Y is not as cheap to run as some may think.

EVs in general have long been associated with low running costs. The idea of no longer having to pay for fuel alone is an attractive proposition for many. However, as a lot of EV adopters are discovering the true cost of ownership can be higher than anticipated.

YouTuber Tall Tesla Guy made the switch to electric, purchasing a Model Y. Initially, the day-to-day running costs appeared to be very reasonable. He spends just $30 a month on electricity for home charging. For comparison, he stated that he spends the same amount on a single tank of gas for his ICE car.

However, he noted whenever he travels long distances supercharging on the Tesla Supercharger Network can be rather pricey. For example, a single charge from 20-80% once cost him $7.45. Although it may not seem like a lot, it’s important to note that figure is drastically more than what he spends on home charging.

Also, the numerous accessories he felt necessary to add to his car racked up the total price significantly. Ceramic coating, window tints and PPF coating were all deemed to be worth it in an effort to protect the car. He noted one can spend upwards of $3,000 on such upgrades, although he also mentioned it didn’t cost him quite that much.

Furthermore, the Tesla Destination Fee for delivery added another $1,200. Tall Tesla Guy was slightly taken aback at this, as the Destination Fee was not mentioned in the overall cost of the car and he felt it was somewhat hidden.

Equally, the tires were another surprise. He noticed a significant amount of wear on them despite only owning the car for around a year and having driven just 11,000 miles. He now believes it’s time to replace all four tires, which will cost upwards of $1,200.

Despite these costs, Tall Tesla Guy does not by any means regret his purchase. For him, the Model Y is by far the best car he has ever owned. Practical yet still fun, Tall Tesla Guy will not be letting go of his Y anytime soon.