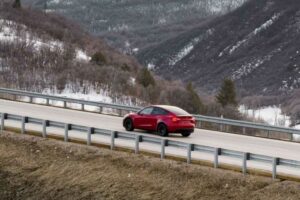 Tesla notes that customers are using their Tesla EVs as their main cars, which is a very important thing.

People consider electric cars as a second or third vehicle in the household, but the real-world experience is that an EV often becomes the primary vehicle, while an internal combustion engine vehicle is running as a backup from time to time, or for long trips.

“For an EV to have an impact on the environment, it must be genuinely displacing internal combustion engine miles, rather than sitting in the driveway as a secondary car used for errands or short trips only. Our data shows that Tesla vehicles are being driven more than average vehicles in the U.S., suggesting that they are generally being used as a customer’s primary vehicle.”

According to Tesla, there is a correlation between the driving range and vehicle usage – the longer the range, the higher the usage. This is probably one of the reasons why range improvements are among Tesla’s main priorities.

“There is a clear relationship between range, how often an EV is utilized and whether it is a primary-use vehicle.”

A relatively high range of 300+ miles (around 500 km) can directly affect the average vehicle usage. First, customers who drive a lot are more willing to buy an electric car with high range. Customer are also more confident to drive more on a daily basis. In the end, sufficient range might prompt customers to make a full switch, without additional conventional cars in the household.

All this translates to more “electric miles” – something that we highly appreciate both from an environmental and economic perspective.