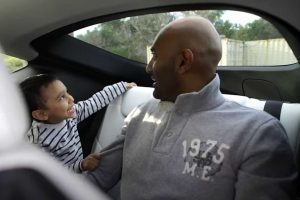 This guy spent over 10 minutes exploring the Model Y’s optional third row, and sitting back there.

This dad and his son fit together in the rearmost seats of the 7-seat Tesla Model Y. It seems there’s enough legroom for adults to fit back there. However, headroom may be an issue for taller riders.

We’ve reported now on several occasions about the Tesla Model Y’s optional 7-seat model. As you may already know, when the Model Y was first revealed, Elon Musk promised three rows of seating in the electric crossover. However, only the 2-row model has been available since launch.

Exactly two weeks ago, Tesla announced the launch of not only the cheaper Model Y Standard Range, but also the 7-seat option. Interestingly, the automaker didn’t initially offer any images or video of the third row. The third row wasn’t revealed on camera during the earlier Model Y debut either, and there hasn’t been much talk about it.

This comes as no surprise since Tesla doesn’t advertise or market its vehicles in the traditional sense. It also doesn’t provide a lot of official specs on its website, aside from range, top speed, and zero-to-60-mph times. Instead, Tesla lets its large and active group of owners, fans, followers, and influencers share the details with the world.

Since the 7-Seat Model Y was made available, Tesla has uploaded an image and a video, though they don’t reveal enough to help. Fortunately, some folks have been able to head into a Tesla store and film their time with the Model Y. In fact, we finally saw some images and amateur videos of people sitting in the rear seats.

As far as we can tell, YouTube influencer Two Bit da Vinci is the first to put together a rather professional video going over the 3-row Model Y in great detail. Check out the video to see all the ins and outs. Then, scroll down and start a conversation in our comment section below.