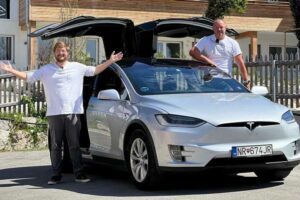 Longevity is a serious concern for most first-time EV buyers, with battery degradation being a particular area of worry. Hence when we find examples of high mileage EVs it’s always interesting to take a look at how they’ve faired in terms of battery health and general maintenance.

Kyle Conner of Out Of Spec Reviews recently had the chance to check out a 2017 Tesla Model X 100D which has clocked up over 200,000 miles. The owner, Slovakia-based Christian, has used it as his daily driver for almost 5 years. Unlike most Tesla owners, he predominantly charges at Superchargers as opposed to at home (which is cheaper and better for your battery). He does this as he travels a lot – he claims he uses public charging roughly 75% of the time.

Christian replaced his front bumper after hitting a chain on the highway. He also replaced his X’s 20″ alloys with 19″ ones due to the poor roads in Eastern Europe. Inside Christian’s Model X, the natural leather has held up remarkably well with only minor creasing. The steering wheel is fairly worn however and is in need of replacement. The Falcon Doors have been superb – he’s had no issues with them as he changes the seals every year.

When new his 100D had a 93.7 kWh usable battery capacity. After 5 years and 200,000 miles, the battery now has an 83.8 kWh usable capacity according to his calculations. This means less than 10% degradation, which is super impressive. That figure is even more remarkable given he supercharges his car so often. The 100D is known to be quite reliable, with its battery pack superior in terms of longevity to that of its 90D predecessor.

His car has a few small rusting spots with paint bubbling in one or two areas. Water has started to seep in through the trunk but Christian plans to have this fixed soon. He has also had a few suspension issues that have been fixed by Tesla.

When driving on the highway, Kyle heard virtually no rattles in Christian’s Model X. He also noted how sturdy and comfortable it felt. Road noise isn’t quite as low as the new X, which has much more sound-deadening material. That said, overall Kyle was very impressed with Christian’s 200,000-mile Model X. He highly recommended stretching to get a 100D over an older 90D to anyone looking at buying a used Model S or X.