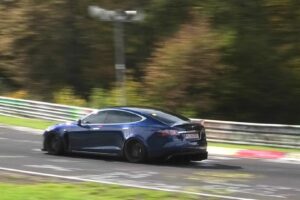 If it’s an official run, the Model S Plaid is the current record holder.

A source from Drive Tesla Canada might have delivered some of the biggest Tesla news of the year. We can’t confirm the validity of these claims but they are impressive.

The quarter-mile run was done at the Autoclub Famoso Raceway in Bakersfield, California on May 11.

What’s interesting is that the time matches exactly what Tesla advertises on its website and just barely beats the Lucid Air prototype’s time of 9.245 seconds done last year.

The source claims the Plaid did the quarter-mile run with a full interior, but we do not know what wheels and tires were used. We also don’t know if it was timed with a one-foot rollout or if it was a standing quarter-mile. Since it was on a drag strip, the run was likely timed with the rollout.

The one-foot rollout matters more if used in 0-60 times (as explained in this video) but not so much with quarter-mile times. Still, for reference, it takes a very fast car about 0.20 seconds to get to one foot.

Drive Tesla Canada saw the footage but didn’t share it in order to protect the identity of its source. However, the source claims the footage will be shown on Jay Leno’s Garage because Leno and his crew were there to film the record run.

Jay Leno supposedly also drove the Model S Plaid on the drag strip and put down a time of 9.50 seconds with two passengers in the car. If you remember, Leno checked out the Tesla Cybertruck with Elon Musk last year.

A quarter-mile time of 9.23 seconds at 152.16 mph is quite mind-boggling and beats some of the fastest production cars ever made. This includes vehicles like the McLaren Senna, Porsche 911 GT2 RS, Lamborghini Aventador SVJ, and the very powerful Bugatti Chiron.

Although, it doesn’t beat the Rimac C_Two’s unofficial quarter-mile run of 8.95 seconds at 156 mph. Check out the full story here.