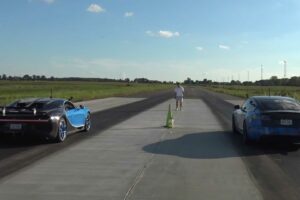 There isn’t a car today like the Bugatti Chiron. It’s expensive, powerful, and rare, and it represents the best of the internal combustion engine. A new DragTimes YouTube video puts the Bugatti in its place as it races the potent Tesla Model S Plaid.

The 8.0-liter quad-turbocharged W16 engine is powering the Bugatti, which pumps out 1,500 horsepower (1,118 kilowatts) and 1,180 pound-feet (1,600 Newton-meters) of torque. It has all-wheel drive, feeding power to the wheels through a seven-speed dual-clutch transmission.

The Tesla Model S Plaid is down on power with its three-motor setup, pumping out 1,020 hp (760 kW) to all four wheels. The Tesla is about 500 pounds (226 kilograms) heavier than the Bugatti, too, but that weight doesn’t show up in the results.

Neither car blows the other out of the water, as the two trade wins back and forth over five races. In the first one, the Tesla got a stellar launch, with the Bugatti slow to leave the starting line. The Chiron narrowed the gap but could not close it before finishing in second place. The Chiron got a better start in the second race, which allowed it to win, keeping the Tesla in its rearview mirror.

The third and final race from the dig resulted in the Tesla earning its second win. The Model S launched quicker from the line, leaving the Bugatti to play catch-up.

The last two bouts are rolling races, which helps the Bugatti a bit but not enough to secure any wins. In both races, the Chiron lost, but it was very close to winning in the second one, losing by just half a car length. The internal combustion engine can’t beat three electric motors.

The Bugatti Chiron is an engineering marvel, a pristine example of what the internal combustion engine is capable of. The Tesla Model S represents the future, and it was able to outperform the Chiron. However, now that Rimac and Bugatti have partnered, we hope the bespoke French brand has its own high-powered EV in development because we’d like to see a proper rematch.