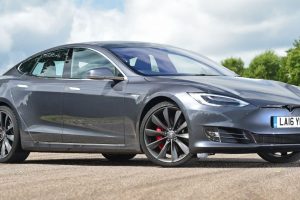 The rivalry between Tesla and Lucid intensifies. A little over a month after the base model Lucid Air – with 653 km of range – debuted, Tesla responded by lowering the price of its Model S to gain the competitive edge. Now, the flagship model seems to be updated with a new EPA range of 409 miles (658 km) on a single charge – that’s an all-time high.

This is only a slight increase from the previous battery update, which saw the Model S Long Range gain a 20% increase in range with an official EPA-rated range of 402 miles (647 km).

News of the latest update was first reported on Electrek, after its reader saw documents of a brand new Model S (with a build date in November 2020) with the longer 658-km range. Tesla has yet to update its website to reflect this change. As for how the automaker managed to squeeze the additional range remains unknown, for now. Electrek said this could likely be the result of using a more energy-dense battery, a deduction (not conclusive, of course) it made based on the new car’s efficiency rating.

According to the documents, the car has a combined 116 MPGe rating (city 119 MPGe, highway 113 MPGe). Tesla made improvements to the Model S’ efficiency on the highway, but city driving efficiency went down slightly. Previously, its city and highway MPGe were 121 and 112 respectively. More updates, soon.