Tesla Model S Has Been On Sale For Eight Years: See How It’s Changed 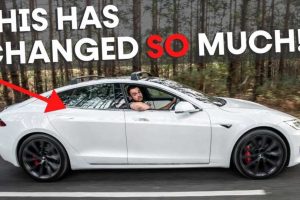 It may not seem like it at a glance, but a lot has been done to the Model S since it debuted.

The Tesla Model S was launched in 2012, which in the fast-paced and constantly evolving world of EVs, seems like an eternity ago. So it may be getting quite long in the tooth, but Tesla has been constantly updating it over the years, so it’s really not showing its age.

Firstly, most car people unanimously agree that the Model S is the best looking Tesla and the exterior changes that have been made to it since launch have been minor but impactful. Inside, changes are even less apparent, but they’re still present, although most of what has been changed is not immediately obvious.

Arguably the biggest changes made to the Model S were through over-the-air (OTA) updates, a feature that Tesla pioneered and one which has allowed the manufacturer to keep adding features to its cars. Listing and explaining all the changes here would need more paragraphs than you might want to read, so the YouTube channel Electroheads, has compiled all the changes into a single video.