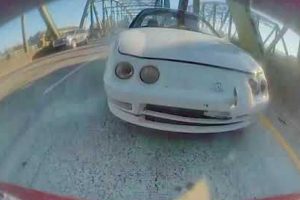 Tesla’s cars are safe and packed with safety tech, but acceleration and agility can be safety features too.

Tesla’s vehicles are some of the safest on the road for many reasons. However, there’s one reason that many people may overlook since it can also be a reason these cars are driven unsafely.

According to Tesla CEO Elon Musk, the Model 3 received the lowest probability of injury ratings the National Highway Traffic Safety Administration (NHTSA) has ever recorded. It earned a five-star overall safety rating – with five stars in every category – from the NHTSA, as well as a Top Safety Pick+ designation from the Insurance Institute for Highway Safety (IIHS).

The Model 3, in addition to all Tesla’s vehicles, is built differently than a gas car. Its skateboard style battery pack puts most of the weight under the car’s floor, which creates a low and even center of gravity. Crumple zones are much more functional when a car doesn’t have a huge, heavy engine up front, but instead, a front trunk “frunk.”

There are many other detailed reasons Tesla’s vehicles are safe, but the most talked-about is the car’s safety technology. While you’ll certainly hear of advanced driver-assist systems failing, they save many more lives than that take. Tesla Autopilot and the features that are part of the upcoming Full Self-Driving capability package assist drivers in many ways.

In addition, the suite of cameras necessary for the latter features is also helpful to Tesla owners in the form of dashcams and the Sentry Mode security system. Without these features, we wouldn’t have the video above and below, which reveal the Tesla safety feature many people overlook: Instant torque.

Sure, instant torque and ridiculous acceleration can be seen as unnecessary. If we give such features to the wrong driver, they can lead to dangerous choices. However, for most daily drivers, instant torque can come in very handy to get out of a tough situation, avoid being hit, etc. Check out the videos to see it in action.