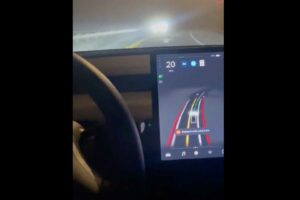 Tesla’s Full Self-Driving Beta Version 9 has no problems with fog in this video from beta testers.

Tesla Full Self-Driving (FSD) Beta Version 9 was released over the weekend, and testers naturally rushed to their social media accounts to share footage and photos of the tech in action.

One member of Tesla’s FSD Beta program recently tested out the EV maker’s pure vision system in foggy conditions, and the results were quite impressive.

Although short, the clip shows the autonomous driving system activated on a Model 3, as attested by the graphics on the Tesla’s infotainment system, which reveal that the car uses Version 9 of FSD. You can see the car moving confidently in rather poor visibility conditions at speeds of up to 30 mph (48 km/h).

The video shared by Whole Mars Catalog and picked up by Teslarati also shows the Model 3 coming to a complete halt at a stop sign and then resuming the drive until the fog cleared out. It’s worth noting that the car didn’t seem to hesitate at all; it remained centered in its lane at all times and the steering wheel did not make any sudden corrections.

Besides detecting the turns in the road, it also detected an oncoming car and automatically turned the high beams on and off during the drive. Now, some people commented that high beams in the fog may not be the best decision, though it’s worth remembering the system doesn’t do that for the human eye but for itself, so it can “see” the road better. And anyway, the automatic high beam function can always be turned off.

As the driver points out during the foggy street drive, FSD V9 seems to be within shooting distance of Level 5 full autonomous driving, though obviously there are some specific scenarios that it must demonstrate it can safely tackle before we can even talk about that.

If you want to see what else FSD V9 is capable of, Whole Mars Catalog also released a video of the Model 3 in a very different driving scenario, namely a daytime test in Seattle (check it out at the top of this post).