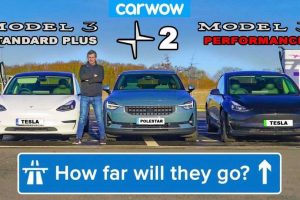 A Model 3 Performance, a Model 3 Standard Range Plus, and a Polestar 2 running loops. Which one dies last?

We’ve said time and time again that you can’t simply rely on EPA-estimated range alone. To better understand how much range an EV will have, you have to look at many different tests. This Tesla Model 3 versus Polestar 2 range comparison test paints a picture of how real-world range testing compares to standardized tests.

It’s important to note that Carwow is based overseas, so it’s not referring to the EPA testing cycle. Instead, its estimates are based on the WLTP testing cycle, which is different.

The EPA says the Polestar 2’s range is just 233 miles. The Model 3 Standard Range Plus has an EPA-estimated range of 263 miles and the Model 3 Performance comes in at 315 miles.

Carwow starts its test with all cars fully charged. It drives them continuously on the M25 in London until they are out of battery power. It’s a long and boring test, but it’s certainly an important one, and we appreciate Carwow’s endurance.

Before we reveal the winner, scroll down to the comment section and place your guesses. Which car traveled the furthest before dying? What do you think each car achieved as its real-world range?

The Polestar 2 calls it quits first, even though its WLTP range is higher than that of the cheapest Model 3. However, if you reference the information above, you’ll see that the EPA gives the Polestar 2 30 fewer miles of estimated range than the Model 3 Standard Range Plus.

The rear-wheel-drive Model 3 is the next car to leave the battle, automatically making the Model 3 Performance the winner. However, just to carry out the complete test, Carwow drives the performance model until it must be pushed to the charging station. It achieved a total of 286.1 miles of highway range.