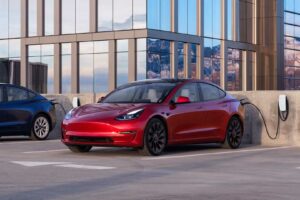 The total cost of ownership is one of the most interesting factors when considering an electric vehicle in comparison to an internal combustion engine counterpart.

Today, we will take a look at Tesla’s 2021 Impact Report, which highlights the total cost of ownership (TCO) of the entry-level 2021 Tesla Model 3 RWD in comparison to some other models.

In general, the single biggest item in the TCO analysis is the initial expense related to the purchase of the vehicle. Usually, the price of an electric car is higher than a conventional model. On the other hand, the maintenance and energy costs are potentially lower for electric cars.

Tesla notes also the importance of the residual value, which in the case of used Tesla vehicles “has remained exceptionally strong since our initial launch.” The analysis includes things like taxes, fees, incentives, financing, and insurance.

The manufacturer underlines that the ownership cost of a Tesla Model 3 is closer to a Toyota Camry (America’s best-selling sedan) than a BMW 3 Series (shown as a more appropriate competitor in terms of performance and “premium” features).

“Tesla Model 3 has a base price similar to BMW 3 Series, but the total cost of ownership per mile is closer to America’s best-selling sedan, the Toyota Camry*”

It means that the Tesla Model 3 RWD is 21% or $6,600 more expensive to own than the Toyota Camry, over 5 years and 60,000 miles. The initial expense is even higher than that but partially offset by lower running costs.

An interesting thing is also the comparison of the TCO of the 2021 Tesla Model 3 RWD versus the 2020 Tesla Model 3 Standard Range Plus (SR+).

In other words, the gap between the affordability of the entry-level Tesla Model 3 and a Toyota Camry widened.

The price increase is partially offset in the TCO by the increasing price of used Tesla cars (low depreciation/high residual value), but considering the trend in prices, the TCO will probably continue to increase in 2022.

The final note. The Tesla Model 3 RWD is the entry-level version, equipped with LFP batteries. Higher range versions or other Tesla models are more expensive, thus their TCO is expected to be even higher. It means that those who consider buying a Tesla should treat the $0.63/mile value ($37,800 total over five years and 60,000 miles) as the base case scenario.