This is quite a radical take on a rally version of the Model 3.

Ever wonder what the Tesla Model 3 would look like if it was a proper rally car? Well, wonder no more. Introducing the rally-fighting Tesla Model 3.

Though it’s just a digital representation for now, the long-term idea/goal is to make this car a reality. The journey from digital to real will take some time though and a bit of money, but there’s a way that you can help with the latter. More on that in a bit.

If you recall, Rivian says its third vehicle in its lineup (after the R1T truck and R1S SUV) will be an electric rally car with a “bananas” level of performance, so maybe someday Tesla will do the same. Until then, this is the only rally car we’ve seen with a Tesla badge.

The man behind the project is Andy Didorosi. He states:

The truth is until electric vehicles can do really, really awesome things as well or better than gas cars they’re just not going to catch on with the wider public. There’s nothing cooler than stage rally so we’re building a Model 3 that can hang with the best of them around the world. Plus, we’re going to do some insane stunts with it along with the help of a few racing legends. 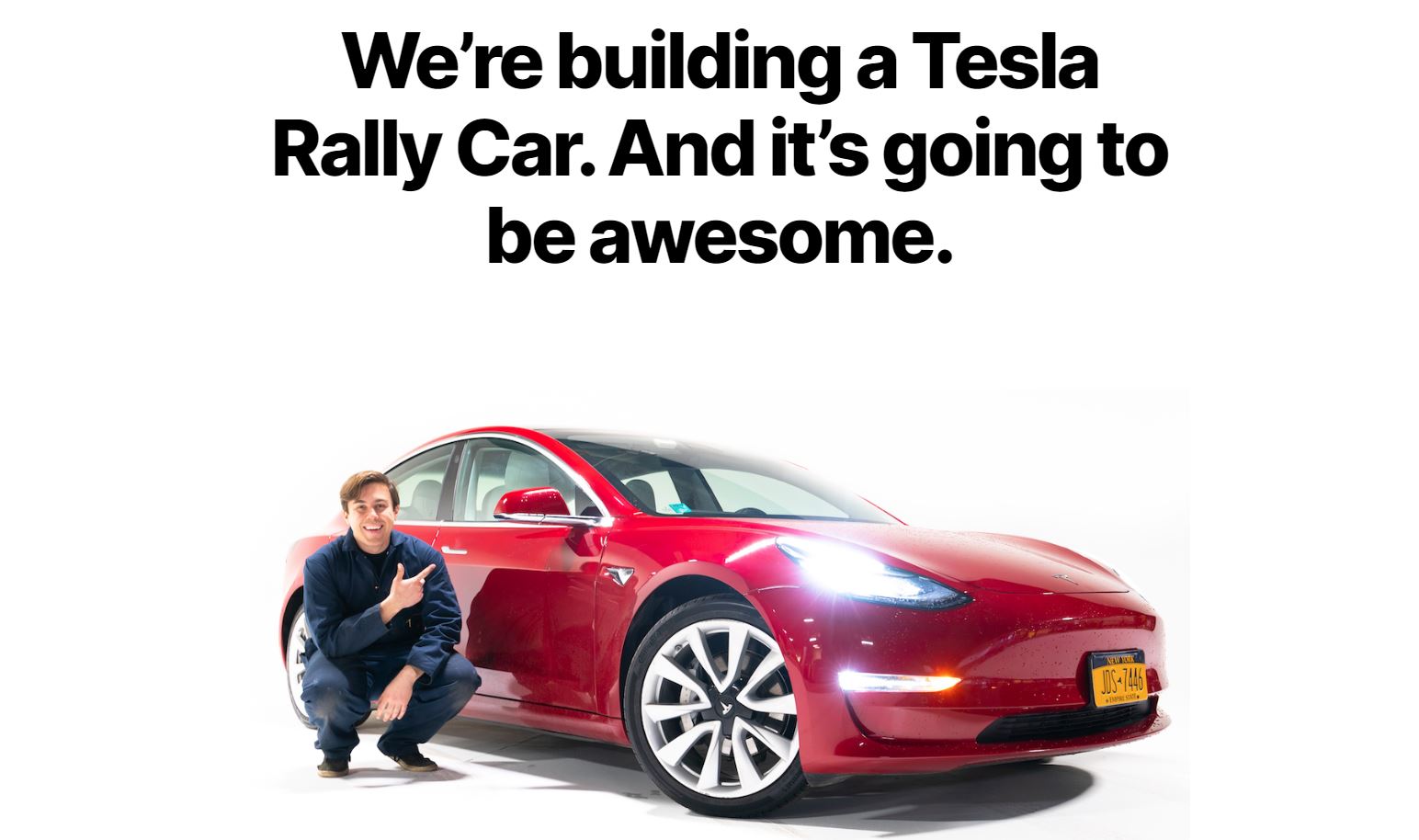 Accomplishing all of that is where we come in. Here’s how we can help:

Rather than trying to get some big automaker to sponsor us we’re going to work directly for you. Yeah, that’s right. We’re giving you each a square inch on the Tesla Rally Car for whatever YOU want to put on it as our sponsor. (PG rules, come on). We’re open to sponsorship from brands, but we want this project to be mainly supported by our fans.

This new business model also means we’ll be making the kind of content you want to see, not what advertisers want you to see. And sharing the behind-the-scenes financials and results of the whole thing so you can run your own team!

Building a rally car is wildly expensive and that goes triple for an electric one. If you’d like to see this kind of work happen, join us as a sponsor so we can build this thing together.

You can contribute to the project via Patreon here

We’ve been working our tails off and finally the day is here! Join the team and secure your 1″x1″ square on the car today at http://www.TeslaRallyCar.com — This is gonna get weird!

For more background on the Tesla rally car project, watch this video and read its accompanying description below.

This is the first step on a long long journey to turn a Tesla Model 3 Dual Motor Long Range Performance into a PROPER Tesla Rally Car! We’re going to enter it into some actual stage rallies around the USA and beyond! Also, huge jumps, big slides and all kinds of insane sending it.

We’ll take you through every step of the build process and what it takes to launch and fund a team. Getting sponsorship is hard – but it’s not impossible! We’ve got some rally legend mentors to help us along the way. You’ll learn how to be a racecar driver and basically how to run a racing team.

If you like this kind of work PLEASE subscribe + like this video. Notifications on! I know everyone says that but the number of subs we have will directly impact how much sponsorship we can dig up and make the car as gnarly as possible!!