Home » Car Reviews » Tesla Model 3 Is Pricier On The Used Market Than New, What Gives?

Tesla Model 3 Is Pricier On The Used Market Than New, What Gives? 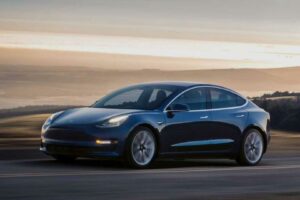 Used car prices are skyrocketing, but only some used cars cost more than they cost new.

As we’ve mentioned on many occasions, used car prices are rising. The short of this comes down to demand. If people want and need a car, they’ll have to pay what the market is asking. However, there’s more to the story.

When the global pandemic hit, it shuttered car factories. Obviously, this meant new car inventory dropped, so people that absolutely needed a car may have had to buy used. Demand for used cars started to rise.

Fast-forward to the present, and automakers across the globe have been impacted by a chip shortage. In addition, there have been other shortages from suppliers. Again, part of this all comes back to the pandemic. Just as much as carmakers had to shutter plants, causing them to fall behind on production, some suppliers faced the same issues.

If you order a new car now, there’s a chance you’ll have to wait to take delivery. It’s not like the days when dealerships across the country were overstocked with a plethora of cars of all styles, sizes, colors, etc. In some cases, it has almost become somewhat of a “made-to-order” market. And, honestly, we think perhaps it should stay that way, but that’s a different story for a different day.

Many Americans are in a huge hurry when it comes to just about everything, and when they want something, they want it NOW. Thus, automakers have overproduced for years, and an influx of cars have sat on dealer lots for long periods of time, which really seems to be wasteful.

While used car prices are soaring, that doesn’t necessarily mean you’ll pay more for a used car than a new car, but in some cases, this is proving to be true. In fact, people are buying out their leases (after being under miles due to less driving during the pandemic), and then selling them for more on the used market. Yes, folks are actually making a profit, which is almost unheard of.

The Tesla Model 3 has always been expensive on the used market. It just came out in 2017, so there hasn’t been a ton of used Model 3s available in many areas, but those we’ve been paying attention to have always been priced high. Now, it will likely cost you more to buy a used Model 3 than a new one. Since people can’t get a new Tesla for many weeks, and likely months, their only option right now is to buy used.

According to Green Car Reports, based on recent research from iSeeCars.com, “Dealers are betting that shoppers will pay more for a used car they can have now, rather than waiting for a new car.”

Scroll down to the comment section and let us know your thoughts on all of this.