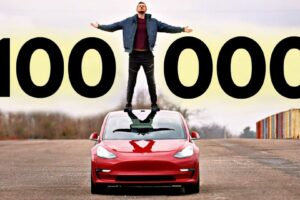 Our friend Andy Slye has had his Tesla Model 3 for four years, and he’s racked up over 100,000 miles. Four years ago, not long after the Model 3 first came to market, you’d better bet many people had concerns about whether or not the electric car was built well enough to endure the test of time, not to mention fears over the longevity of its battery pack.

Fast forward to the present, and Slye is still driving his early single-motor rear-wheel-drive Model 3. He points out that even though it’s the “slowest” Tesla, it’s still peppier than almost any other car he’s encountered while driving.

Slye shared some of his favorite features of the Model 3, such as the car’s incredible safety, as well as its one-pedal driving. He notes that one-pedal driving not only makes driving easier, but also reduces wear and tear of the car’s friction brakes all while improving range.

Slye also calls Tesla Autopilot invaluable, though the Supercharger network is one of the main reasons he bought a Tesla. He loves over-the-air software updates, though he admits that, at times, they put him at the mercy of Tesla’s engineers who may decide to push out a feature or change that he doesn’t necessarily need, want, or like.

As far as battery degradation is concerned, Slye says the Model 3 has lost about 2.2% of its estimated range after four years and 100,000 miles, which is impressive. He goes on to provide a detailed look at what it might cost you to own a Model 3. He calculates that he’s spent just over $2,000 to charge the car over 100,000 miles.

He provides the following topics and timestamps to go along with the video above. Check it out and then let us know what you think by starting a conversation in the comment section below.