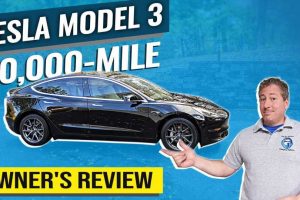 I picked up my Tesla Model 3 in May of 2019 and have since driven it nearly 21,000 miles. Overall, I’ve been extremely pleased with the vehicle and figured it was about time I put together a video that explains some of the things that I like and dislike the most about the car.

I also needed to put the video together now because I decided to sell it, and when I listed it for sale, I immediately had a couple of people that were prepared to buy it. You might ask if I was so pleased with it, why did I sell it? That’s a good question and I have a very simple answer: I wanted to buy a new one with the recently announced updates.

I’ve done pretty much everything I could with this car, like our Model 3 70-mph highway range test, and a V3 Supercharger test, plus, our managing editor John Neff also has a Model 3, so if we need to do any reports or tests on an older version of the Model 3 we have his car.

The “refreshed” Model 3 has a number of improvements, including the heat pump system from the Model Y, and the range is now officially EPA rated at 353 miles per charge. Therefore, it made sense for InsideEVs to have the new version available for whatever challenge we want to put it through. Oh yeah, and I kinda dig the new magnetic sun visor clips, but you’ll have to watch the video to see why.

I explain in the video how, among other things, I really love the driving experience, and how the Model 3 allows you to adjust the power delivery (chill mode), and also the steering, the strength of the regenerative braking as well as whether or not the car employs an artificial creep feature. In my recent Volkswagen ID.4 first drive, I learned that Volkswagen has employed a strong artificial creep and it cannot be turned off. I believe that’s something that many ID.4 owners will be disappointed to find. Tesla allows its customers to choose between artificial creep, freewheel rolling, and automatic hold, which I love – they let the consumer decide.

Although there are very few things that I don’t like about the car, I manage to cite a couple of annoyances like the lack of a grab bar for the front seat passenger, no integrated sunshade for the glass roof, and insufficient seat bolsters.

There is also one pretty important attribute that didn’t make the video (because it was getting too long), and that’s how efficient the Model 3 is. I needed only 5,534 kWh to power the vehicle 20,806 miles. That’s an average consumption rate of 266 wh/mi or 3.76 mi/kWh (16.48 kWh/100km) which is outstanding considering I admit to having a heavy right foot quite often.

I pay $0.12/kWh for electricity so that would mean I should have paid $664 to power the car nearly 21,000 miles. However, I have a solar array that produces about 75% of the electricity my home and car needs. Plus, I charged for free at Superchargers for about 2,000 miles worth of driving. Therefore, I probably paid only about $175 to power my car for the past 16 months, and that works out to less than a penny a mile. If I use the full market rate for the electricity the car consumed, it’s about 3 cents per mile, which is still incredibly inexpensive.

I did have a broken windshield, and the car was scratched (rubbed by another car) while parked in a parking lot so I did need to have those two repairs done, but those incidents weren’t the car’s fault. The only regular maintenance I needed to do was replace the wiper blades and fill the washer fluid. The tires were looking pretty worn, and I probably would have needed a new set soon, so that would have to be added to the maintenance expense. However, I sold the car, so in 16 months all it needed was wipers and washer fluid.

Tesla estimates that my new Model 3 (dual motor, long-range) will be ready in 6 to 8 weeks, so, unfortunately, I’ll be trucking around in my Toyota Tacoma until it arrives. This will be the longest period that I haven’t had been driving electric since May of 2009 when I got my first EV, which was a MINI-E.

I’m hoping it comes a little sooner, but whenever it does, I’ll do a video review of the refresh changes, and a 70-mph range test shortly thereafter. It will be winter here in New Jersey by then, so it will be a cold-weather range test, and I’ll repeat the test on the same route in the spring once the temperature is above 70° F (21° C).

If there’s anything specific you’d like to see us do with the new Model 3 once I get it, let us know in the comment section below.