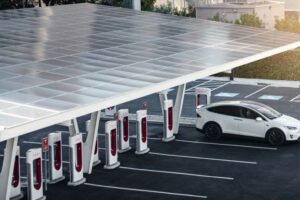 The Tesla Supercharging network is considered one of the most reliable charging infrastructures in the world and, according to the latest data, this improved in 2021.

It does not tell us how many individual stalls were offline, but in general, the metric indicates that usually, most of the stalls are available for use.

“We’re aware that the chart showing Supercharger uptime looks silly, but that’s kind of the point. While coverage is important, uptime is essential. Few things are as frustrating as arriving to a charging station with a near-empty battery, realizing that none of the charging plugs are working.”

Tesla notes also that in 2021 alone, it opened 912 new Supercharger locations around the world. The peak output of the V3 Superchargers is 250 kW, while the previous V2 is rated at up to 150 kW.

As of the end of the first quarter of 2022, the number of stations increased to 3,724. The number of individual connectors (stalls) increased year-over-year by 37% to 33,657, which almost means that there are roughly 9 connectors per site on average.

It’s an impressive achievement to maintain high reliability and high expansion rate at the same time.

We guess that the reliability of fast charging infrastructure is gradually improving in general, as the industry matures and the new, large charging sites are more and more often equipped with battery energy storage systems.