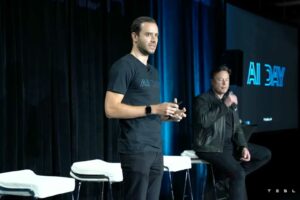 Tesla’s Senior Director of Artificial Intelligence and leader of the Autopilot Vision team, Andrej Karpathy, has announced he is leaving the company.

The high-profile Tesla executive who played an essential role in developing the EV maker’s AI and driver assistance tech provided no reason for leaving in the announcement he made on Twitter on July 13.

“It’s been a great pleasure to help Tesla towards its goals over the last 5 years and a difficult decision to part ways. In that time, Autopilot graduated from lane keeping to city streets and I look forward to seeing the exceptionally strong Autopilot team continue that momentum.”

He added that he does not have concrete plans for what he will do next in his career, only saying that he’s looking to “spend more time revisiting my long-term passions around technical work in AI, open source and education.” Tesla CEO Elon Musk replied to Karpathy’s tweet, thanking him for his work at the company.

“Thanks for everything you have done for Tesla! It has been an honor working with you.”

The announcement of Karpathy’s departure came only a day after Tesla confirmed it was shutting its office in San Mateo, California, and laying off over 200 people there. The office was part of the company’s team developing Autopilot driver assistant technology.

Karpathy, who worked at the EV maker’s Palo Alto office, led the computer vision team of Tesla Autopilot, overseeing efforts to train AI technology using data collected from Tesla vehicles on the road. He had been on a sabbatical since late March 2022, when he said he was taking time off to “re-sharpen my technical edge.“

Losing the leader of its Autopilot Vision team comes at a critical time for Tesla as Elon Musk is pushing his teams to achieve full self-driving capability next year, after missing the previous targets several times in the past.

Reuters reports that Karpathy’s departure took several people within the company by surprise, with a former Autopilot team member telling the news agency that Karpathy “is as much a workaholic as Elon.“