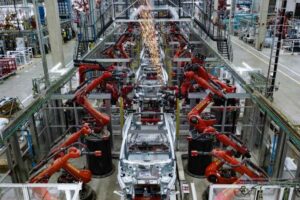 According to information shared on Twitter by vocal Tesla investor Gary Black, Tesla has already ramped up its new Gigafactory in Berlin, Germany, to produce 350 Model Y crossovers per week. Local reports suggest that the company’s goal is to be at 1,000 vehicles per week before the end of April 2022.

Tesla has said that it hopes to ramp up the Berlin Gigafactory to produce around 5,000 to 10,000 units per week by the end of 2022. Tesla aims to produce about 30,000 cars at the new factory this year, and more cars per year in 2023. We’ve embedded Black’s tweet below, which includes information from a Bloomberg article published by Automobilwoche.

Tesla’s Gigafactory in Germany just officially opened after many months of delays. As usual, Tesla held a delivery party at the factory to hand over the very first Model Y crossovers produced at the plant. Musk has been cautious when talking about the new factories in Germany and Texas, making it clear that the ramp-up will likely take plenty of time.

Looking forward, there will be a three-week factory pause at Giga Berlin in the fall of 2022. During this time, Tesla will be changing battery cell chemistry and/or format for the electric crossover. Teslarati suggests that it’s likely Tesla will transition the factory to make Model Y SUVs with the new 4680 battery cells.

German-made Model Ys currently use 2170 cells. Tesla likely delivered the first Model Y crossovers with the new battery format at its grand opening party for its Gigafactory in Austin, Texas.

The article goes on to include that Tesla is in the process of building a battery cell factory at Giga Berlin. Reports suggest the factory is coming together quickly, and it could potentially open sometime soon. This makes sense if Tesla is planning to begin producing German-made Model Ys with 4680 cells after the factory shutdown this fall.