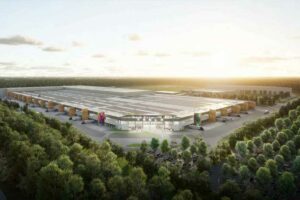 Tesla’s plans to expand its factory site located in Grünheide near Germany’s capital Berlin are on hold for the time being after the local municipal council has taken the application off the agenda.

According to German radio broadcaster RBB cited by Reuters, the mayor of Grünheide, Arne Christiani, removed the item for the September meeting, motivating that there’s a need for more clarification. He was not able to say whether the issue would be addressed this year.

Tesla applied in May to build on a further 100 hectares it plans to acquire east of its plant in the Berlin-Brandenburg metropolitan region, which would expand the site’s area by a third, as per RBB‘s report at the time.

The US electric vehicle manufacturer already has 300 hectares of land for its auto assembly factory and battery plant under construction; it would need the additional 100 hectares to build a freight station, logistics areas and parking spaces.

While Tesla did not respond immediately to Reuters‘ request for a comment, German Economy Minister Robert Habeck said on September 15 he had no information on any changes to Tesla’s plans in Germany. He said he doesn’t have any indication that the company was suspending investments in Germany or more broadly speaking any plans in the country.

“As you know and maybe remember, Tesla said they didn’t want to have state aid, so in a way this is private business. I have no deeper information right now.”

According to RBB’s initial report in May, a large part of the land Tesla is interested in buying belongs to the German state of Brandenburg and would be suitable for sale as most of it is a tree farm. However, that might require a change to the development plan for the area and another agreement related to water usage (water protection area).

This certainly brings back not very pleasant memories for Tesla as the Giga Berlin-Brandenburg project was delayed repeatedly over development plan and especially water usage.

Meanwhile, the production ramp-up at the plant is progressing “very well” according to Tesla, with the company reportedly targeting a weekly production of 5,000 vehicles by the first quarter of 2023. That would be a spectacular increase over the 1,000 cars a week Tesla reported in June 2022.