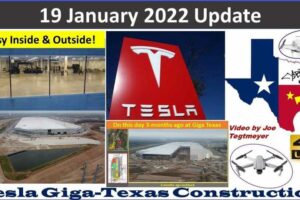 If no one told you that Tesla’s Giga Austin isn’t yet officially open for business, this recent video may leave you a bit confused. The factory appears to be “in action” no matter where you look.

As Tesla’s upcoming Gigafactory in Texas gears up to open in the very near future, the spy shots and drone videos are mounting. This is because the closer Tesla’s Giga Austin gets to official production, the more interesting the footage becomes.

You can honestly only watch so many videos of a drone flying around a large property seemingly aimlessly. However, once there’s truly compelling footage to watch and analyze, it certainly gets quite interesting.

Tegtmeyer tweeted out information about the video, as well as a handful of shorter clips. He says the video was shot just yesterday, on January 19, 2022. In the video, Tegtmeyer gets many clear views into the building, Zeppelin Systems parts arrive, and there’s a whole lot more to digest.

As you can see from the tweet above, the area that’s reportedly related to 4680 battery cell manufacturing appears to be quite busy. However, due to the angle of the drone footage, it’s a bit difficult to figure out exactly what’s happening.

The above drone video clip provides another look into the factory from the outside. No matter where you look, the lights are on, people are moving, and the factory appears to be neat, clean, and ready for action.

This particular clip shows the General Assembly areas on the second and third floor. However, more interestingly, we get to see some Model Y crossovers being assembled at the ground level.

Check out the video and tweets. Then, head down to our comment section to start a conversation about Tesla’s Giga Austin. Is it ever going to open?