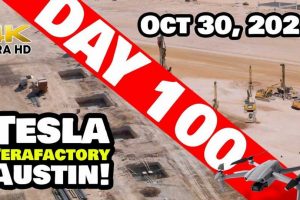 Over those 100 days (as of October 30, 2020), the site transformed hugely thanks to thousands of workers and machines:

As of today, the main focus in on foundation work, basically everywhere. The biggest is of course the pit for stamping machines:

Terafactory Texas notes that there is an entirely new section near the east-central area of the site: