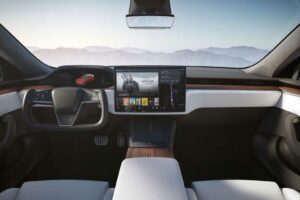 There’s a fair chance you may have seen a brief video clip circulating around social media yesterday. It claimed to be a refreshed Tesla Model S with a new power-adjustable “swivel” touchscreen. We’ll admit that we did a double-take when we saw it, and some assumed it must be an aftermarket product or some fancy video editing.

That said, it appears the new Tesla Model S and Model X swivel-screen function is a reality. Tesla owners have been requesting such a feature, and it seems the US electric automaker was listening. Check out the tweet below:

While the growing consensus may be that this is the real deal, we still have plenty of questions, and you probably do as well. When is it coming? Does it cost extra? And perhaps most importantly, can current Model S and Model X owners get it as a retrofit? If so, how much might it cost? Will it come to future Model 3 and Model Y vehicles? If not, can it be made available as a retrofit for these EVs?

Regardless of the missing details, the point here is to make Tesla’s center touchscreen easier to see, both for the driver and the passengers, though not at the same time, obviously. As Electrek points out, Tesla has been upping its infotainment game in many ways.

Shortly after the Model Y came to market, Tesla “refreshed” the Model 3 to follow suit with its new features and updated technology. Moreover, the new Model S and Model X vehicles now have a landscape-oriented screen like Tesla’s smaller vehicles, though the screen is larger. The flagship EVs also get a new screen for rear-seat passengers.

According to Electrek, the swivel screen shown in Larry Li’s video above appears to be a new Tesla feature. However, the powered frunk is an aftermarket mod Li did himself. Li says that the vehicle in the video clip was produced at the end of April 2022, so that gives us some idea of when Tesla may have added the swivel screen feature.

However, we still have questions about whether or not a Tesla driver would be okay with not having access to the screen. It seems it would become less of an issue in the future as the brand’s Full Self-Driving Beta technology improves, but we’ll have to wait and see how it all plays out.