Tesla Driver Charged With Dangerous Driving For Speeding While Sleeping 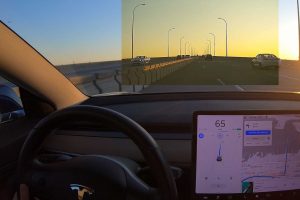 The driver was spotted with the seat fully reclined (most likely sleeping), traveling at over 140 km/h / 87 mph.

Earlier in the year, during the summer, 20 year-old Leran Cai was spotted on a highway somewhere between Edmonton and Calgary (by other drivers and even the police) in the driver’s seat of his 2019 Tesla Model S, but he wasn’t actually manning the wheel. In fact, his seat was fully reclined and, by all accounts, the driver was asleep whilst the car was traveling at a speed as high as 150 km/h, driving itself on Autopilot.

He has now been charged with dangerous driving, a criminal offense, but on top of that charges for speeding have also been added. Global News Canada quotes Kyla Lee, a criminal lawyer from Acumen Law in Vancouver, who says that to her knowledge, this is the first such case ever in Canada. She said

‘ I don’t know that I’m aware of any other case in Canadian law ever where somebody has been asleep in a self-driving car that has been charged with dangerous driving. ‘

The law in the Canadian province of British Columbia is not very clear on autonomous and semi-autonomous driving systems in automobiles, but it certainly does not state that the driver can let go of the controls and take a nap behind the wheel. Cai is scheduled to appear in court on January 29 , 2021 and there is little chance he will be able to dodge these charges (especially since he’s been charged with other driving-related offenses in the last few years).