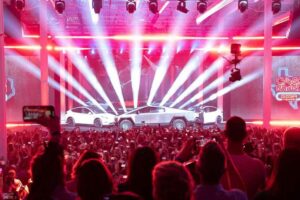 As people eagerly wait to learn more about the upcoming Tesla Cybertruck, there has been plenty of talk about the electric pickup truck’s windshield wiper blade. Of all the things Tesla fans and critics could be talking about, they’re focusing on a wiper blade that may not even see production.

That said, the Cybertruck has been shown and spied with a massive wiper blade that certainly turns some people off. Tesla CEO Elon Musk noted that it would change. The original Cybertruck prototype didn’t have wipers, and probably for good reason.

Some people who noticed the missing wiper assumed that perhaps there would be some special wiper or wiper technology, including the potential for lasers. Some speculation came to light due to some seemingly related Tesla patents, as well as the words of Musk. When a more recently updated version of the Cybertruck was shown spotted in December 2021, Musk responded to comments on Twitter about its huge wiper.

At any rate, Tesla had two Cybertucks on display at its recent Cyber Rodeo delivery party at the grand opening of Giga Texas. While there’s no way to know if it’s the final design, some people posted up-close images of the current design as shown below.

It appears the large wiper arm has two smaller, more traditional wiper blades attached to it. Tesla may be bouncing around other ideas, and it certainly has some time before a final decision will become necessary. However, this concept seems to make a whole lot of sense.

It would likely cut costs and supply chain concerns. Moreover, when it comes time for people to replace the wiper blades or swap them out with winter blades, they may be able to simply head to the local automotive parts store (or shop online) and pick up some “normal” and “inexpensive” replacements.

Obviously, we’ll be waiting to see how this wiper situation all plays out. In the meantime, what do you think of this version of the Tesla Cybertruck’s wiper blade? Do you think Tesla will continue trying other options? Do you have a better idea? Start a conversation in our comment section below.