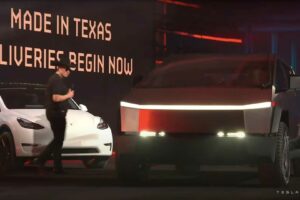 Tesla organized an event at its new Giga Texas plant called Cyber Rodeo where among other things it showed off the latest version of the Cybertruck, which featured some changes and improvements since the last time we saw it. It may look the same, but the Cybertruck that people who attended the venue got to see the rear glass go down electrically, for instance.

There is still an unmovable partition between the passenger compartment and the bed, according to attendees, so you won’t simply be able to walk out of the cab towards the rear. No current pickups offer this feature, although there are a few whose rear window can be dropped, just like in this Cybertruck prototype.

People also got to see the interior, which doesn’t seem quite production-ready, with the Model S and Model X yoke and missing airbag. Some also noted that the quality of the interior didn’t look up to scratch, suggesting that many of the parts are not final and some are probably just placeholders.

The side view cameras also appear to be placed in a different spot on this prototype. They are located in the plastic cladding around the front wheels, and this appears to be their final position; it will most likely stay like this for production. Panel alignment and gaps are also atrocious, but all will surely improve for production.

The Tesla Cybertruck will be built at the new facility in Texas, where it is now expected to enter production in early 2023. Unveiled in 2019 in concept form, it was originally supposed to start rolling off the assembly line in late 2021, but then at was pushed to late 2022 and the most recent postponement sees it pushed to early next year.

We’re going to smash the window again. We can’t wait to build this here. Sorry for the delay. But you’re going to have this next year, and it’s really going to be great.