Tesla Cybertruck No Longer Available For Order Outside The US 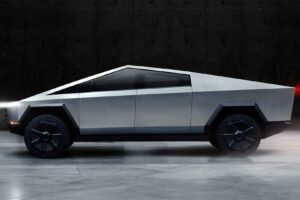 Tesla Cybertruck is one of the most hyped vehicles, electric or otherwise, of recent years, inspiring a remarkably wide spectrum of reactions, from outright love to sheer ridicule at its angular, futuristic design. Until recently, the Cybertruck was available for order both in America and in Europe, but it seems you can now no longer order one on the Old Continent

We don’t know what prompted the manufacturer stop taking Europeans’ orders for the Cybertruck, but it was signaled by @tesla_adri over on Twitter. The German Tesla driver and fan announced that

Tesla does no longer accept orders for the cybertruck in Europe. The website changed from Bestellen = Order to Get Updates.

We’re not sure what will happen next, though. Does this mean Tesla is effectively cancelling all orders from Europe? In that case, it will at least have to return the €100 that prospective buyers were asked to pay to reserve a Cybertruck in Europe, although the manufacturer has not announced this officially, so it may not be the case.

This change may have something to do with the fact that Tesla has reportedly accumulated enough Cybertruck accounting for the combined production figure for the next three years. What this essentially means, according to Elon Musk, is that people who order their Cybertruck today may not take delivery until 2026, and that’s if everything goes to plan and there are no more production delays.

This is not the first time Tesla made changes to the Cybertruck order page. Previously, in October of 2021, the manufacturer removed the powertrain options (they did the same for the Roadster) that buyers could choose between. Then they moved the planned start of deliveries from “late 2021” to “2022” before removing the estimate completely.

Musk also recently stated that 2023 will be a major year for Tesla in terms of new model releases, because it will likely be the year when the Semi, Roadster and Cybertruck all debut, or at least that’s the plan. Tesla also recently opened the order books for the Semi, which you can now reserve for $20,000.

Apparently, Tesla also removed the Cybertruck from its China website, and the reason behind the move could very well be the very high demand it is expected to enjoy in America.