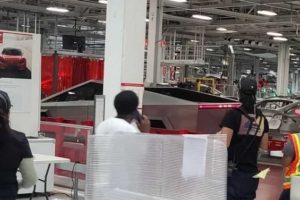 But what is the Cybertruck doing at Tesla’s factory production line in California?

Tesla Cybertruck was recently seen and photographed at one of the production lines at the Tesla Factory in Fremont, California. The photo was shown on the r/TeslaMotors subreddit.

The image include also four workers, who seem interested and very likely as surprised as we are because the Cybertruck is not supposed to be produced in Fremont, but in Texas, in a plant currently under construction, with a launch date in late 2021.

So what is going on in Fremont? Is Tesla upgrading/retrofitting something in the existing prototype, or maybe building a few more with the latest tech?

The manufacturing lines are not envisioned for the Cybertruck, it probably barely fit inside.

We remember that when Tesla built the first Model S or even the first smart EV demo for Daimler, they used stuff from the first-gen Tesla Roadster. Maybe the first Cybertruck is simply sharing some parts with the existing production models and those can be manually installed at the factory?

There are clearly more questions than answers to this story so stay tuned for more details as well as pay attention to where the Cybertruck pops up next time.

It will be fun to see the release candidate versions driving in the real world in the coming months too.