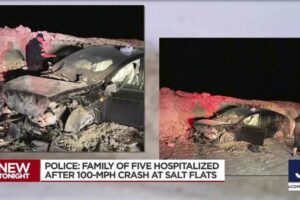 Several media outlets are reporting about a recent Tesla crash that occurred at the Bonneville Salt Flats, an area in Utah that’s popular for putting cars through the paces in what seems like a relatively safe environment. Think again. Sadly, the family hit a berm while traveling at speeds in excess of 100 mph. However, fortunately, they all came out of the wreck without any life-threatening injuries.

Based on the speed of the crash, the minimal braking, the fact that the car essentially hit a natural wall, and the condition of the Tesla itself, one might think that the family’s injuries would be serious. However, you can see in some of the photos that at least one or two of the family members are walking around outside the car, checking out the terrible aftermath of the crash.

It was a family of five with three daughters. Two of the girls are teens and one is 12 years old. All the occupants were transported to the University of Utah hospital and/or a local children’s hospital with various injuries. That said, multiple news reports confirm that none of the family members’ injuries are life-threatening. According to the Wendover Police Department via Teslarati:

“Seatbelts and airbags were credited for reducing injuries. All five occupants were transported to the University of Utah hospital.”

Based on reports by the media and first responders, the Tesla Model X – some reports are calling it a Model Y, and others haven’t identified the Tesla model – collided with an earthen berm with almost no braking. It seems the large pile of rock blends in nicely with the rest of the salt flats, and the driver may not have even seen it.

At speeds over 100 mph, obstacles come up much more quickly than anticipated, and even experienced drivers can be caught off guard. This is why it’s smart to travel the course at a slow speed first before burying the accelerator pedal.

Drivers visit the Bonneville Salt Flats to check out their car’s top speed and agility without having to worry about obstacles, pedestrians, other traffic, and the rules of the road. However, that doesn’t mean it’s safe.

The salt flats are also used by automakers for testing prototypes. The location even has its own website that notes its use for lane speed racing, among other events. Our good friend Kyle Conner has spent his fair share of time racing around the salt flats, and he’d be sure to tell you that you really need to be cautious and know what you’re doing before venturing out.

This is a developing story. If and when more details become available about the Tesla crash and the family involved, we’ll update this article or provide another. In the meantime, leave us a comment below.