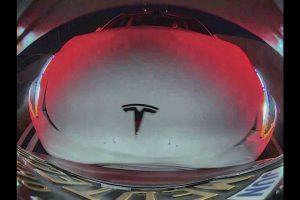 Stopping on the highway can quite easily lead to a situation like this one.

Highway pileups are sadly a bit too common on highways and motorways across the world. You hear about the major ones involving dozens, sometimes even hundreds of vehicles, on the news, but there are a lot more pileups involving fewer vehicles that only make the local news – they never go national.

This looks like it is one of those pileups. The footage featured in the video shows an unknown vehicle being rear-ended by a Tesla Model 3. The scenario is one we’ve seen countless times: the vehicle with the rear-facing camera brakes and eventually stops on the highway – we presume other vehicles were stopped in front or the driver saw something up ahead and decided to bring his car to a halt.

Once the camera vehicle is stopped, you can see the white Model 3 approaching from behind and stopping within a safe distance behind. However, the Tesla is rear-ended by another vehicle and it’s sent forward into the car with the camera. We don’t know exactly how many vehicles were involved (clearly at least three, based on the video, but there could have been more, and this could have just been the start of a larger pileup).

We searched around for a video from the Tesla’s perspective, hoping to get a better understanding of what happened, but we didn’t find one. Footage from the Model 3 would have given us a look both in front of it (to see why the driver that got rear ended in the video above stopped), as well as behind, to see why it was rear-ended in turn.