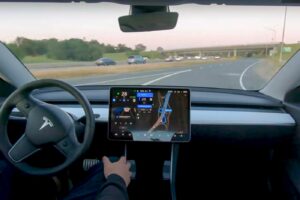 Tesla has begun offering what it calls “Full Self-Driving” Beta 10.2 to owners of vehicles with compatible hardware via a download, if their driving score is good enough. CEO Elon Musk announced the move early on Monday of this week, opening up the Beta version of the software to those who were not in the original group of Beta testers, but whose driving safety is deemed sufficient by the software that monitors owners’ driving behavior.

The release of the latest version was delayed for a few days after Musk tweeted that the software team was addressing some “last minute concerns,” though he did not elaborate what they were. The CEO said that the Beta 10.2 version would be offered to about a thousand users with a perfect 100/100 safety score over a distance of 100 miles. Tesla is expected to offer the system to those with lower scores later on.

The company offered a few caveats for those who will be able to request the Beta version of the software, after their driving skills are judged by the car’s systems.

“Use Full Self-Driving in limited Beta only if you will pay constant attention to the road, and be prepared to act immediately, especially around blind corners, crossing intersections, and in narrow driving situations,” the automaker said.

The latest version claims to offer point-to-point semi-autonomous driving, with the owner being able to enter a destination and let the car do most of the driving while the owner is required to remain alert and monitor the road, ready to take over at a moment’s notice. A new driver monitoring system that uses a camera to observe the driver’s eyes and face, sounding an alarm when it detects that the driver is not paying attention to the road. The lack of more extensive driver monitoring system had been one of the criticisms of what Tesla calls Full Self-Driving.

The latest version of the still-incomplete software will offer some new screen visualization features that display the environment as the car’s software sees it.

A number of industry observers have pointed out over the years that extending Level 2 functionality to city streets effectively puts such a system in an environment for which Level 2 systems were not initially intended, while also requiring drivers to stay alert at all times and monitor the road, making it strangely similar to just driving given the effort that is being expended to monitor the car’s behavior and reactions in traffic.

“Full Self-Driving is in early limited access Beta and must be used with additional caution. It may do the wrong thing at the worst time, so you must always keep your hands on the wheel and pay extra attention on the road. Do not become complacent,” the automaker also warns.

Industry observers have also noted that FSD is not intended to evolve into an eyes-off, brain-off Level 3 system that permits drivers to take their eyes off the road for extended periods, like in a system offered by Honda in Japan, thereby limiting its potential (and also conflicting with its name). This means that those who buy the system, either for a $10,000 one-time fee, or a $199 monthly subscription, are not expected to eventually receive a semi-autonomous driver-assist system that will let them take their eyes off the road and use that opportunity to read or text, for instance, or a safely take a nap like in a Level 4 system.

Tesla is not alone, however, in stretching the capabilities of Level 2 systems, as General Motors announced days ago that it would offer a system called Ultra Cruise in some of its more exclusive vehicles starting in 2023, one that will eventually be able to operate “in 95% of all driving scenarios.”

Ultra Cruise—not to be confused with the more limited Super Cruise system offered in some GM vehicles today—will likewise offer operation on city streets as opposed to highways, with advanced driver attention monitoring features that will compel drivers to keep their eyes on the road and be ready to take over, thereby requiring driver attention at all times. GM’s Ultra Cruise will be continuously upgraded through over-the-air updates that will improve the system’s functionality, though the automaker has not indicated whether the system will ever allow eyes-off operation as a Level 3 system.

Lucid, for its part, will reveal details of its Dream Drive system later this week on October 12.