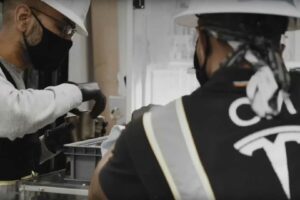 Tesla plans to open a battery manufacturing equipment plant in Markham, Ontario, as the company ramps up the production of more affordable, higher-range 4680 battery cells.

The announcement was made on Twitter by Markham city mayor Frank Scarpitti on November 4, via an excerpt from his Mayor’s Review publication. It was picked up by Automotive News Canada.

Scarpitti posted a second tweet on November 5, saying that “Tesla is already up & running” in Markham; he did not elaborate on that, though. Tesla did not comment on the mayor’s tweet.

In 2019, the EV maker acquired Canada-based Hibar, a manufacturer of pumps that are used in fast-speed battery assembly that Tesla is introducing for its new 4680 cells.

Last year, Tesla senior vice president Andrew Baglino said at the Battery Day event that its “vertical integration” with Hibar and others would allow the company to build batteries faster and scale up production of its 4680 battery cells.

In the Q3 2021 earnings call last month, Baglino said that Tesla would start delivering its first vehicles with 4680 batteries early next year, though he added that “this is a new architecture and unknown unknowns may exist still.”

Tesla currently builds the 4680 cells at its pilot factory in California and plans to produce them at its upcoming factories in Texas and Berlin. The Markham facility will most likely produce equipment for the 4680 battery cells.

We recently saw some battery equipment being delivered to Giga Texas, which suggests that Tesla is getting closer to producing 4680 cells outside its pilot line on Kato Road near Fremont.

The first Tesla cars packing 4680 battery cells will be the Model Y (both from Giga Texas and Giga Berlin), likely followed by the Cybertruck or the Semi.

“Tesla’s growing commitment to Canada underscores the capabilities of the Canadian workforce and a modern automotive industry.”