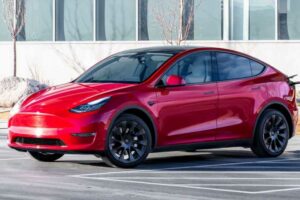 Many Tesla buyers are waiting several months to take delivery of the electric vehicles, due to high demand, exacerbated by inflation and the ongoing semiconductor shortage. Despite the letdown for consumers, some Tesla owners saw an opportunity in the market’s current climate and decided to capitalize on it.

Some Tesla owners in Los Angeles have realized they can make more money flipping and re-selling their EVs as demand forces buyers to endure long wait periods, as the Los Angeles Times reports. One 33-year-old automotive enthusiast detailed the process to the publication, including his slow increase in profits with each new Tesla sold.

Dennis Wang said he lost money on his first try flipping a Tesla, before going on to make $4,000 from his second attempt and $7,000 for the third resale. The process is not unlike flipping property or concert tickets. Additionally, Wang’s Tesla flipping plans have him holding multiple Teslas on order, in addition to the one he owns — and soon plans to sell.

“I have a Model S currently that I’m probably going to sell within another three months, pending the market,” said Wang. “I also have another Model Y and a Model X on order.”

Wang is not the only person working in this unique EV resale market, as many buyers are willing to pay tens of thousands of dollars beyond retail prices.

Eddie Gribust, who outfits Mercedes-Benz Sprinters for work, sold a Tesla Model Y that he and his family drove for nine months. Gribust reportedly made $5,000 off of the sale, and the buyer flew to him in Boise, Idaho from Las Vegas, Nevada to pick the EV up. He went on to document his experience in a video on YouTube.

“Since my business is buying and selling these Sprinters, I’m aware of things like the microchip shortage,” Gribust said. “And everybody has been talking about how the secondary market especially has grown 20 to 30 percent. I was about to order a [Tesla] Model X and the Cyber Truck. The delivery times were nine months to a year, and that would obviously signal high demand, and therefore, low supply. From there, it was taking advantage of simple economics.”

In addition to supply issues causing high demand and long wait times for buyers, consumers are more interested in EVs than ever. And it’s precisely this foundation that gives many sellers profits, vehicle after vehicle.