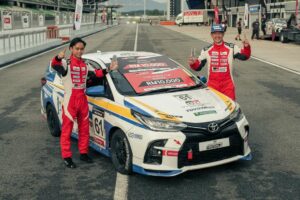 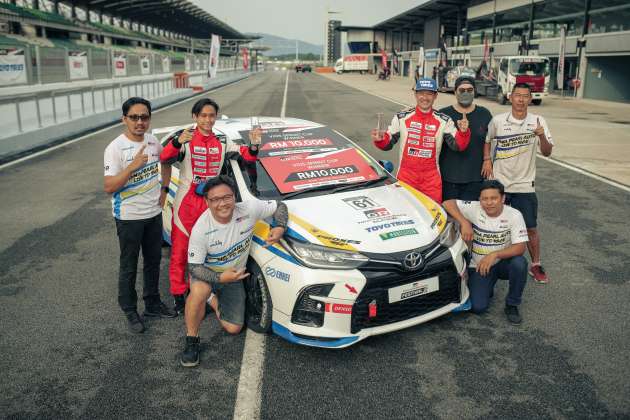 It was a clean sweep for “the king and his protege” at the first ever Gazoo Racing Vios Sprint Cup event, held over the weekend at Sepang International Circuit. The “king” is none other than Tengku Djan Tengku Mahaleel, who isn’t just riding on his Malaysia’s Drift King reputation, but is also a three-time Vios Challenge overall champion.

The Vios Sprint Cup (VSC) is held in conjunction with the Malaysia Championship Series (MCS) and features two one-hour races over the weekend, with two-driver teams competing in the Vios and vying for total prize money of RM60,000.

In Race 1, Tengku Djan sat in the top five early on and never really appeared to threaten the front runners. Later on, he picked off those ahead one at a time before positioning himself as high as second in the 10th lap, 30 minutes into the race, and just as the pit window opened for a driver change.

It was then left to young Mika – a graduate of the Gazoo Racing Young Driver Development Program – to challenge the more experienced pros on the grid. From third, he quickly challenged Goh for second before setting his sights on the lead. That move would not come until the final few corners of the last lap, and he pulled it off.

“In these kinds of races you really have to pick your battles and that’s precisely what I did. I told myself that I would only go all out in the final two laps. I wanted to close the gap on Nabil immediately after taking over from Djan but it was better to just let the battle between Nabil and Goh play out ahead of me and save my tyres for the end,” said the composed Mika.

In Race 2, it was Djan who was the second driver and he also left it until the penultimate stages of the race to take the lead. While Race 1 was held in blistering heat, Race 2 got underway after being delayed twice and just after a heavy downpour subsided, making conditions around the 5.5 km circuit even more challenging.

In a reverse grid format, the Race 1 winning pair of Djan and Mika started Race 2 in sixth position and carrying weight penalties. The biggest gainer in the opening stages was Laser Motor Racing’s Putera Adam, who jumped 17 places from last and into the lead by Lap 7. The fast 16-year-old was among the last drivers to make the compulsory pit stop for a driver change, handing the wheel to veteran Eddie Liew for the remaining 30 minutes of the race.

With the driver changes completed, Eddie was 4.7 seconds ahead of Djan and Boy Wong, but by Lap 14, the three drivers would be three abreast fighting for the lead. With only three laps remaining, Djan took the lead, and then the chequered flag.

The winner heaped praised on his young teammate. “At the end of the day it’s all about team work and both drivers must have similar pace, and only then will you have a fighting chance. Mika has been able to keep his cool throughout the race weekend and on top of that he has the speed. We have to work as a team, there must be a sharing of knowledge, and you can’t do everything yourself,” Djan said.

He also touched on the challenges of the VSC compared to regular Vios Challenge races. “It’s a one-hour race and it’s a lot more stressful. Fitness definitely plays a role and it was definitely hot today as well. For example, in a race where everyone is on identical cars, I close the windows on my car so I get better aerodynamic co-efficiency but that means you’re essentially cooking in the car and without fitness, you will mentally breakdown,” he said of Race 1.

The VSC was introduced to offer variety. “UMW Toyota Motors’ foray into Malaysian motorsports began with the introduction of a street racing series. That has since evolved to include races on the half and full track at Sepang, the organising of a night race, the introduction of a programme to develop young drivers and creating a Rookie Class, and even participation in the Sepang 1000KM Endurance Race last year as well as the running of the Vios Enduro Cup,” said UMWT president Ravindran K.

“These elements combined are in line with our efforts to contribute to not only growing interest in motorsports, but to make it even more exciting for both the participating teams and drivers, as well as spectators and enthusiasts,” he added.