Take A Closer Look At The 2024 Chevrolet Equinox EV's Dashboard 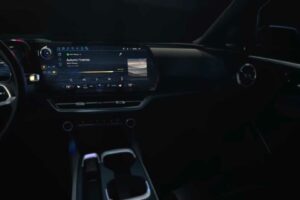 Chevrolet continues to tease its upcoming 2024 Equinox EV, this time providing a closer look at the electric compact SUV’s interior.

After releasing renderings of the exterior and interior in January, Chevrolet has uploaded a CGI video that gets up-close with the dashboard.

The video starts with a close up of the round, turbine-style air vents located at each corner of the dash before moving to the floating center console that has a generous space underneath it. We can spot a sizable cupholder and a row of controls at the base of the dashboard consisting of two round dials and buttons between them.

The camera then focuses on the passenger side of the dash and its ambient lighting panel echoed by a smaller one on the door card. The short video then zooms out to offer a wide view of the dashboard dominated by a large center touchscreen with two flat air vents below it.

We also get a look at the digital instrument cluster which features the speedometer at its center and the multimedia display on the right. The odometer at the bottom reads 48,211 miles, which may or not be some sort of code as the Equinox EV in the video is not a real vehicle but a simulation.

The interior in the video appears to belong to the regular LT, as it lacks the red accents of the sporty 2024 Equinox EV RS. Speaking of these trim levels, the fine print at the beginning of the video reiterates that the RS will be available in fall 2023, while the availability of the LT will be announced at a later date—it will likely launch in 2024.

The 2024 Chevy Equinox EV is expected to have a starting price of just under $30,000, according to GM’s estimates. As with the larger Blazer EV, the Equinox EV will be based on the Ultium platform. Speaking of the electric Blazer, Barra said it will be unveiled in July 2022 before entering production in mid-2023.