Now that pickup trucks come with luxurious interiors, soft-riding air suspensions, and enough technology to equip a mobile office, automakers are looking to their beds as the final frontier of innovation. The tailgate is the new differentiator in the cutthroat truck wars, and the leading pioneers are GMC’s MultiPro and Ram’s Multifunction tailgates.

Aside from the multi-parts, these tailgates are more different than similar, even though they both still function as traditional tailgates. Launched in mid-2019, Ram’s design is simpler, and uses a barn-door or 60/40-split swinging-gate design. The GMC MultiPro tailgate is more complex and versatile than Ram’s Multifunction tailgate, and essentially acts as two tailgates in one. Here’s a deeper look at how they work and how they’re priced.

GMC’s MutliPro beat Ram’s Multifunction to market in the GMC Sierra 1500 and still wows onlookers in person. A second tailgate is built into the traditional tailgate and can be used for six different purposes with the push of one of two tailgate buttons or remotely through the fob. With the tailgate in its regular locked position, the inner, smaller tailgate can be opened up and used as a shelf for work purposes, or just to lean on and commiserate what went right or wrong after the hunt or the game or the job.

Press the inner release button and the shelf has an inset that raises in the vertical position to create a 6-inch load stop for longer cargo that doesn’t fit in the bed. Clever.

But it gets even better when the whole tailgate is opened. The load stop stretches even longer and flatter to haul plywood or larger toys, adding about 15 inches to the almost 80-inch standard box or the almost 70-inch short box. It does not lock, however, so it can flip shut if there isn’t weight pressing against it to keep it upright.

But the coolest feature is how the MultiPro acts as a huge, 4-foot wide step in its lowest position. One of the knocks against GM’s simple but brilliant corner step is you have to then climb over the cables supporting the tailgate on either end. The MultiPro step is low enough to the ground for grade schoolers to climb aboard without assistance, and a retractable handle can give a boost to those with arthritic knees. 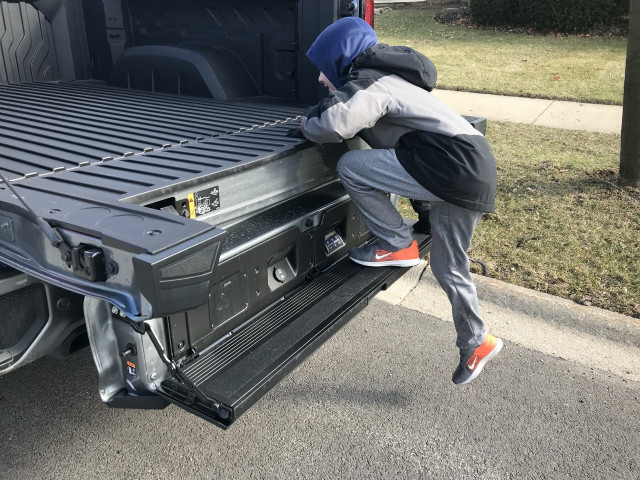 2020 GMC Sierra AT4 with MultiPro tailgate

Supporting up to 375 pounds, the step can also make the perfect tailgate seat, especially when equipped with the available Kicker sound system with Bluetooth connectivity and a USB port. The truck does not need to be on for the sound system to rock the lot.

While MultiPro’s step can be dropped to make for easier access to the bed, Ram’s Multifunction tailgate in the 2020 Ram 1500 actually gets you closer. 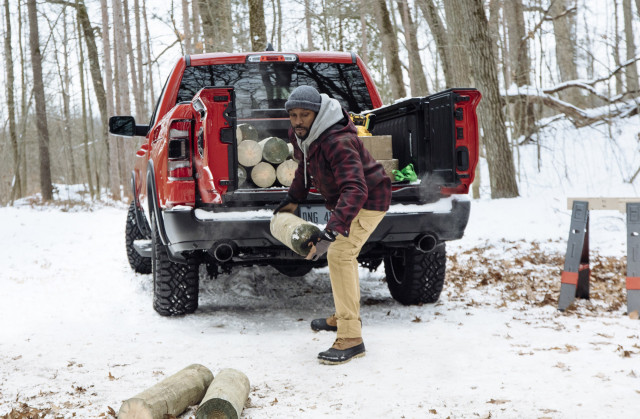 Since the Multifunction split gate hinges on either side and can be opened in a 60/40 driver/passenger side split, you can stand right behind the bumper to reach in for items in the bed. Taller people with longer arms, or anyone with a shovel should be able to reach into the back of the bed.

The traditional handle in the tailgate has two levers; the lower one can be used to open the driver’s side split, then a handle in the passenger’s side of the split gate opens it fully. If you forget which side to close first, there’s a rubber stop on the small door so it won’t ding the paint. The barn doors open up to 88 degrees, so they won’t swing out beyond the sides of the truck and get ripped off by a passing idiot. Either side or both can swing open. And it can also be used as a traditional tailgate that supports up to 2,000 pounds. An available retractable bed step tucked under the center-left of the hitch enables deeper access to the bed. The step is shaped like a giant boot print more than an actual step.

Ram’s Multifunction tailgate offers its full flexibility even when connected to a trailer. The available step is designed for this purpose. 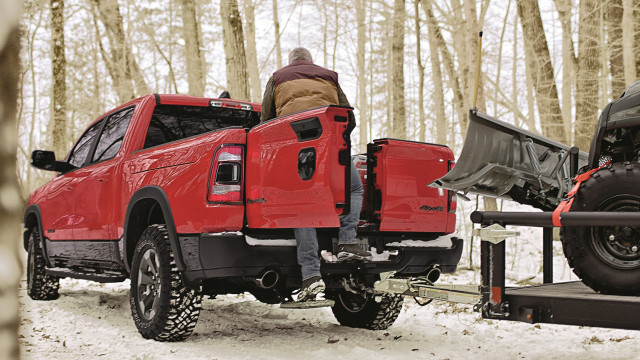 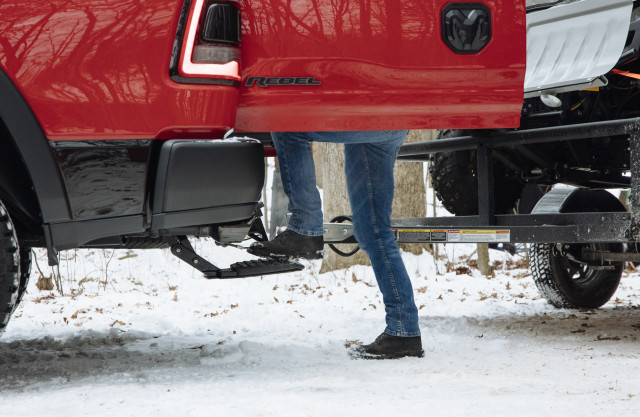 In its lowest position to access the bed, the MultiPro gate can hit the hitch, though aftermarket hitches are available to solve this problem. With the corner step, there is still access to the bed, so this isn’t that big of a knock against MultiPro. But Ram’s tailgate works seamlessly with towing.

Ram’s Multifunction tailgate is offered on all seven trims for $995 and the retractable bed step adds $295.

Like the tailgate itself, the availability of GMC’s MultiPro is more complicated. It comes standard on Denali, AT4, and SLT trims, but is not offered on others. The SLT starts at $45,895 for a  rear-wheel drive double cab with a standard box. The next step down is the Elevation, which is $4,000 less and comes with less equipment beyond just the MultiPro.

For the truck shopper who plans to haul odd loads, or has a specific bed length need of about 94 inches, the GMC MultiPro tailgate is the better option. For the frequent tower who wants easier access to the bed, the Ram Multifunction tailgate is the choice. Both offer several thoughtful features that will make life easier for truck owners.