Home » Suzuki to launch next 'icon' in second half of 2021, no CKDs, says Naza Eastern – Jimny next for Malaysia – paultan.org

Suzuki to launch next 'icon' in second half of 2021, no CKDs, says Naza Eastern – Jimny next for Malaysia – paultan.org 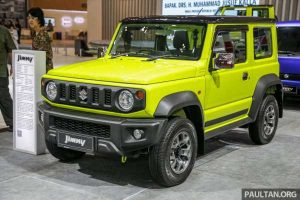 Suzuki is back in Malaysia! New local distributor Naza Eastern officially unveiled the Suzuki Swift Sport tonight at its new showroom in PJ, within Naza Automall along the Federal Highway. You can read our full launch report of the third-generation SSS here.

What’s next for the brand and its new local partner in Malaysia? According to Naza Eastern head of company Mohamad Redza, this year will see the company focus on Suzuki’s “icons” as it rebuilds the brand in Malaysia. He won’t explicitly name the icon in question, but looking at Suzuki’s current global range, it has to be the Jimny.

If so, the fourth-generation Jimny, which is hot in demand over the world and currently sold here by grey importers, will be officially available in Malaysia very soon, with a factory warranty. Mohd Redza says that the iconic model will make its debut in the second half of 2021 and it will be a CBU import.

Speaking of CBU imports, that’s going to be the way forward for Suzuki in Malaysia. Mohd Redza says that at the volumes that Naza Eastern is looking at, CKD local assembly is not viable. Furthermore, Suzuki has assembly operations in Thailand and Indonesia, and cars can be brought in via the ASEAN free trade area (AFTA).

Back to the Jimny. Now, we know that the Jimny is made in Japan and more recently, in India by Maruti Suzuki. Our guess is that Naza Eastern will source its Jimnys from the Land of the Rising Sun, as there’s a free trade agreement between Japan and Malaysia that will enable it to save on import duty, compared to importing from India. Jimny, Malaysia, excited?