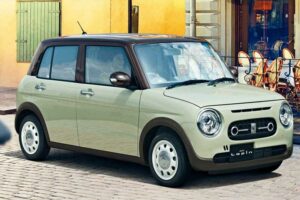 Limits can lead to creativity. Japan’s Kei-class cars are a perfect example. There are rules for their size, engine displacement, and power output. Automakers respond by being inventive and making fascinating little vehicles like the new Suzuki Alto Lapin LC.

The LC takes the regular, already cute Alto Lapin and makes it even more adorable. The standard model features a grille with an expansive metallic piece spanning the area between the headlights. However, the LC has a completely different look with a small, open grille that has chrome accents. A narrow slit is higher up on the vehicle’s face. The headlights gain chrome trim rings.

This version’s rear is the same as the standard Lapin, except for a wing-shaped badge with the LC logo in the standard.

Where the regular Alto Lapin’s front end subtly evokes the Renault 4 from the 1960s, the automaker says it wants the LC to recall the Suzuki Fronte 360 from the late ’60s. To stick with the retro aesthetic, the little vehicle is available in old-school shades like light green, pastel pink, beige, brown, and blue. There are also two-tone color schemes with a roof in brown or white.

Like the exterior, the LC shares an interior layout with the standard Alto Lapin but has special touches. The upholstery is a mix of brown plaid fabric and chocolate-colored faux leather. Other areas like portions of the door panels and headliner are beige, which keeps the cabin from appearing too dark. Buyers can select a wood-effect or Dark Gray Pearl panel for the dashboard.

The Lapin LC’s interior amenities include an optional 7-inch infotainment screen. There’s also a heated seat and automatic climate control. Lapin is French for rabbit, and as such, there are animated bunnies on the info display beneath the speedometer.

The Lapin LC uses a 660cc three-cylinder engine making 63 horsepower (47 kilowatts). All models get a CVT, and buyers can select a front- or all-wheel-drive layout.