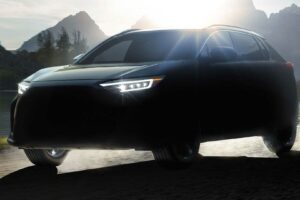 The sun and the earth meet in the naming of Subaru’s much-anticipated first electric vehicle, the Subaru Solterra, the brand announced Tuesday. The Latin words converge on an all-wheel-drive SUV powered by batteries and furthering Subaru’s earth-friendly image.

Subaru revealed little else about the Solterra except that it will arrive in 2022 and will continue the partnership forged with Toyota, where Subaru provides all-wheel-drive technology and Toyota provides the electrified powertrain. In addition to the anomalous Subaru BRZ and Toyota 86 affordable rear-drive sports cars, Subaru and Toyota partnered on the Subaru Crosstrek Hybrid, which uses Toyota’s Prime plug-in hybrid technology.

The Solterra will be similar to the Toyota bZ4X Concept launched last month and it will be sized like the Toyota RAV4 compact crossover, which was the bestselling car in America last year. Details are scant, but we expect a motor on each axle in an all-wheel-drive setup. The Solterra crossover SUV will ride on a new global platform and is the first vehicle to reflect Subaru’s plans to make hybrids and electrics account for at least 40% of its global sales by 2030.

Teaser for Subaru Solterra electric crossover due in mid-2022

That would require the Solterra to do a lot of heavy lifting in raising Subaru’s electric vehicle profile, despite the brand’s longstanding commitments to sustainability and earth stewardship.

Since 2004, Subaru’s U.S. plant in Lafayette, Ind., has operated as a zero-landfill factory, where all manufacturing waste is either recycled or turned into electricity. The National Wildlife Federation designated that plant a backyard wildlife habitat, and Subaru’s U.S. headquarters in Camden, N.J., is also a zero-landfill office.

Yet Subaru has lagged the competition in hybrid and electric powertrain development. The only electrified vehicle in the automaker’s small but robust lineup of all-wheel-drive vehicles is the Crosstrek Hybrid with a paltry 17-mile electric range and limited sales in zero-emission states, such as California, Maryland, and New York.

Expect a full reveal of the Subaru Solterra later in the year.