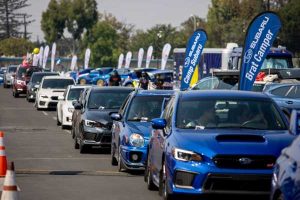 Subaru of America (SOA) has managed to set a new Guinness World Record for the largest parade of Subaru cars during the 2020 Subaru Tecnica International Subiefest, which took place at the OC Fair & Expo Center in Costa Mesa, California.

To set the new record that only it and no other car company can do, SOA gathered a total of 1,751 Subaru vehicles to participate in a parade, beating the previous record set in 2015 that saw just 549 vehicles. According to the company, the parade spanned two miles (3.2 km) and was organised as an alternative to its traditional festival to ensure the safety of attendees during the pandemic.

The event also gave attendees a chance to have a first look at the next-generation BRZ, albeit wrapped in camouflage and seen through some thin curtains. Based on images posted on Instagram, the coupe doesn’t appear to grow significantly from the current model, but there are some significant design changes to note.

These include teardrop-shaped headlamps, the addition of vents just aft of the front wheels, sharper taillights and a ducktail for the rear boot lid. The display car also sports 10-spoke alloy wheels in a gunmetal finish, which were teased in an official image by the carmaker.

No details about what’s going on under the bonnet, although it has been rumoured that a 2.4 litre naturally-aspirated flat-four with Toyota’s D-4S (direct and port fuel injection) system will be used. Codenamed as the FA24D, the mill is said to make 217 hp and 240 Nm, which is an improvement over the current FA20D that serves up 205 hp and 212 Nm (the automatic version has 200 hp and 205 Nm).

Previously, it was also reported that the next BRZ will get the FA24F from the Ascent three-row SUV – a 2.4 litre turbo – that serves up 260 hp and 376 Nm. A six-speed manual and automatic are expected to be the available transmissions for the sports car, although we’ll have to wait for Subaru to reveal more later on.