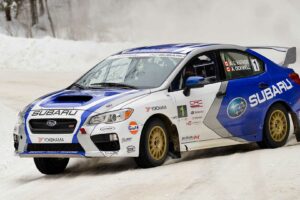 Subaru is well known for its success in rally racing, and besides Finland, no place likes rallying more than the crazy folk up in Canada. Subaru Canada used to compete directly in the sport with Subaru Rally Team Canada, but ended that run after the 2017 season of the Canadian Rally Championship. Despite the pull out, the automaker is still a presenting sponsor of the sport and has a unique strategy to get more people involved – give them money!

If you buy a new Subaru up in Canada and promise to compete in rallies with it, you’ll get a $10,000 Canadian ($8,000 USD) rebate. Sound too good to be true? Well, there are some stipulations.

First, you have to be a Canadian resident and hold a valid Canadian Rally Championship license. Fairly easy so far. Next, the car must be bought through an authorized Canadian Subaru dealer. No problem. Lastly, you must convert the car to rally specifications per CRC guidelines. Hmm… that might be tougher.

CRC guidelines stipulate that a competition car must have a full roll cage, safety harnesses, fire extinguishers, a safety kit, and competition-spec seats (no OEM seats). Also, no sun roofs are allowed. There are many other regulations to follow, which you can find in the 2021 CRC Rule Book.

So this rally-spec car may not end up being a daily driver you use to drop your kids off at school, though you’d probably score your progeny some points with the cool clique if you did. In fact, much of your giant rebate may be claimed by this conversion process.

That said, if you’ve ever had a hankerin’ to try rally racing, Subaru Canada is dangling a giant carrot to entice you to get started. What Subaru model would you buy? There’s something about a rally-spec BRZ that sounds just right to our ears.