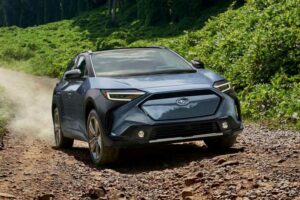 Subaru plans to build a dedicated EV assembly plant from about 2027 as part of a multibillion-dollar investment in electrification over the next five years. Subaru CEO Tomomi Nakamura outlined the plans on May 12 while announcing fiscal year earnings.

While the 2023 Solterra EV is made at Toyota’s Motomachi assembly plant in Japan on the same line as the bZ4X, future Subaru EVs launching in the second half of the decade will be manufactured in-house.

Nakamura said that Subaru will begin making its own EVs in mixed production with internal combustion vehicles at its Yajima plant in Japan in the mid-2020s. From about 2027, the automaker will build a dedicated EV factory on the site of the Oizumi plant, which currently makes engines and transmission systems.

The executive did not offer a production capacity figure for the new EV plant but said it will be limited at the beginning with room to expand over time.

Subaru’s CEO said the EVs made there would be exported worldwide to markets including the United States, where dealers are starting to ask the automaker for battery electric cars, especially after experiencing the Solterra.

“Two or three years ago, U.S. retailers were not asking about EVs at all. But in this last year, it’s suddenly increased.”

As for the types of EVs Subaru will build, Nakamura said the company is still contemplating what kind of segment or models the upcoming electric vehicles will be.

Subaru plans to invest 250 billion yen ($2.05 billion) over the next five years in hybrid and EV initiatives, targeting at least 40% of its global sales to come from hybrids and pure EVs by 2030. Going forward, Subaru plans to electrify all new vehicles sold worldwide starting in the early 2030s.

Last month, the Japanese automaker announced pricing and the EPA-estimated range of the 2023 Solterra EV, which will be available in all 50 states. Starting at $44,995 (plus $1,225 destination and delivery charge), the electric SUV will start arriving at US dealers this summer, although in limited numbers initially.

The Solterra is eligible for a $7,500 federal tax credit and other state incentives.