Home » Car Reviews » Still Waiting On The Next-Gen Tesla Roadster? It May Arrive Next Year

Still Waiting On The Next-Gen Tesla Roadster? It May Arrive Next Year 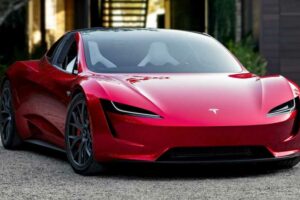 Tesla has continued taking pre-orders for its next-generation Roadster, a fully electric supercar reboot of its first-ever EV. The automaker had closed the reservations for Founders Series versions in December 2021.

An interesting tidbit about the new pre-orders is that Tesla’s online reservation page only shows the amount a customer has to pay instantly ($5,000) and the remaining $45,000 in the next 10 days. The total price of a Tesla Roadster isn’t available anymore on Tesla’s site.

Originally, the price of a Tesla Roadster was $200,000, and for a Founders Series Signature version, it was $250,000. With inflation and a worldwide chip shortage, Tesla might not want to bind themselves to a price that does not match the cost of a car being produced next year.

The Founders Series in Tesla terminology refers to the cars that have a low VIN — these are the first-produced priority deliveries. They also tend to have a Founders Series badge showcased on the rear of the vehicle.

The latest reservations page setup by Tesla does not offer a Founders Series Tesla Roadster. This might be due to the fact that there are already enough reservations for this particular version — it’s likely “sold out” at this stage.

Tesla unveiled the next-gen Roadster on November 16, 2017, at the Tesla Semi unveil event. Elon Musk had promised that the Tesla Roadster will be the fastest production car ever made with a 0-60 time of 1.9 seconds. But with the launch of the Tesla Model S Plaid, this milestone has almost been achieved with a 0-60 mph time of 1.99 seconds.

So, with current technology and battery advancements, the base variant of the Tesla Roadster should be able to do even better than 1.9 seconds. However, a Tesla Roadster will also be upgradable to a 1.1-second car with the SpaceX rocket thrusters package. Without a doubt, this will likely redefine what it means to be a “supercar” forever.

Written by: Iqtidar Ali. An earlier version of this article was originally published by Tesla Oracle. Revised update edited by EVANNEX.